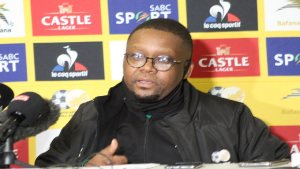 Bafana Bafana has suffered another blow on the eve of their international friendly against Uganda on Thursday evening at the Orlando Stadium.

First assistant coach Cedormir Janevski has tested positive for COVID-19. The Belgium mentor becomes the fourth member of the team to be released due to the virus.

Team doctor Tshepo Molobi says, “We did a second round of tests yesterday and the results came back today with all tests coming back negative with the exception of coach Cedormir Janevski. Subsequently, what then transpired we promptly put him in quarantine as is per requirement and he is currently well. He hasn’t raised any concerns in terms of symptoms.”

“Let me add that the coach received his first dose of Pfizer vaccine last week and that’s possibly why the reason he is feeling well, but let me add that there is also that possibility that subsequent to that vaccine that could have led to the situation we find ourselves in now with the results coming back positive but of course as the team we cannot conclude on that and as a result, we had to activate all known protocols in order to safeguard the safety of everybody.”