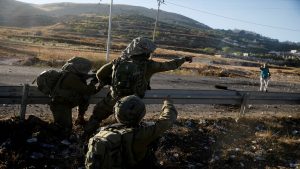 Israeli Special Forces killed an Islamic Jihad militant and two Palestinian security men in an exchange of fire during a raid in the occupied West Bank on Thursday.

The Special Forces had entered the Palestinian city of Jenin to detain gunmen suspected of having recently attacked Israeli troops, an Israeli security source said.

The two Palestinian officers may have been killed in a possible case of misunderstanding.

Jenin deputy governor Kamal Abu El-Rub said undercover Israeli troops killed one man – claimed by Islamic Jihad as a member – and wounded another as they sat in a car outside the Palestinian military intelligence security service headquarters.

Two of the service’s officers returned fire and were killed, El-Rub told Reuters at the hospital where the dead men were brought to.

The Israeli security source said that after the initial exchange of fire with the militants, Palestinian security officers summoned from a nearby compound by the commotion shot at the Israelis.

“It appears that the unit they fired on was undercover,” the source said. “Our forces fired back, apparently thinking that the shooting from the Palestinian security men was part of the clash with the wanted terrorists.”

There was no official Israeli comment on the overnight incident. The Palestinian Authority coordinates security with Israel in the West Bank despite long-stalled talks on resolving the Israel-Palestinian conflict.

During last month’s fighting over the Palestinian-run enclave Gaza, unrest also flared in the West Bank. Nabil Abu Rudeineh, a spokesman for Palestinian President Mahmoud Abbas, said the incident was a “dangerous escalation” and the PA was holding Israel responsible for the consequences.