‘Load shedding has affected productivity of employees working from home’ 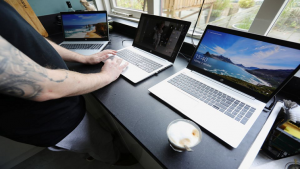 South Africans working from home say load shedding has forced many of them to return to the office, hence placing them at risk of contracting the coronavirus amid a third wave in the country. Earlier this week, Eskom implemented Stage 2 load shedding, following breakdowns of generating units at the Kriel, Arnot, Majuba and Tutuka Power Stations.

Experts says productivity levels of those working from home are dropping due to disruptions in the power supply.

South Africans have been burdened with load shedding since 2007. 14 years on, and government is yet to solve the country’s energy crisis and what is described as an inhibitor to economic growth.

Due to the COVID-19 pandemic, many companies adopted the work from home model. However, the recent bout of load shedding has made it impossible for many to continue being productive.

While some have tried to work around load shedding schedules, others say they are forced to return to the office.

“Even though we had the inverter, I wasn’t able to work because the entire area was down which meant that even suppliers of Wi-Fi were down. There was no way I could work so I had to go to the office. This is a huge problem. The effort of getting ready to go to work is a mission, going to the office, coming home and I am exhausted,” says one employee.

“We check the schedule make sure our laptop is charged, phones are charged. We have this massive power bank that we connect power banks to, so we still have internet connection. It’s a huge inconvenience but we have to make it work,“ says another employee.

Executive at Productivity South Africa, Albert Brink says, load shedding has certainly affected productivity levels for many companies, especially for those that work in teams.

“It is a concern at many of my clients’ premises. The disruption is noticeable where people are dependent on other people, where you work in a bigger team; load shedding is affecting that in a big way. From whichever angle, load shedding does affect productivity. I have no doubt in my mind about that.”

Brink says there are ways to mitigate the impact of load shedding on productivity. He says this period can be used to catch up on planning and for work that requires thinking time.

He explains how both employers and employees can keep up their levels of efficiency during outages.

“The big thing is to schedule work especially work where interaction is required. Staff members working together must communicate with one another regarding load shedding schedules. There are a number of gadgets available, not expensive, that you can use to keep Wi-Fi going. Good old pen and paper can actually become very handy, especially when you have extended outages. Very often we have work that requires quiet concentration time. Sometimes, a load shedding event is a blessing in disguise because you can catch up on activities that require thinking time.”