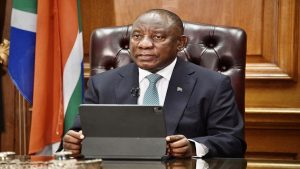 President Cyril Ramaphosa says the ability to address the country’s energy crisis swiftly will determine the pace of the economic recovery.

He was outlining government’s economic recovery plans during a virtual briefing.

“We know that resolving the energy supply shortfall and reducing the risk of load shedding is our single most important objective in reviving economic growth because there is no economy that can really grow without energy security,” he said.

Ramaphosa reassured South Africa that Eskom will remain the country’s main energy generator – despite announcing that Nersa’s licensing threshold for embedded generation projects will be increased to 100 megawatts.

“This intervention reflects our determination to take the necessary action to achieve energy security and to reduce the impact of load shedding in businesses and households across the country,” he said.

The President says they are working to ease the pressure on Eskom.

“Eskom has a future in our country and Eskom is the biggest generator in our country with 45 000 megawatts. For anybody to build up that capacity it will take easily 30-50 years, in my book. Eskom will continue as a generator of energy, continue playing a key and central roll but right now, because of the challenges that Eskom is going through, we need to ease that pressure on Eskom and allow other generators to come to the fore,” he adds.

South Africans and the business community are hopping mad over this.

The latest group to speak to SABC News on this are university students.

They say they are frustrated at the frequent changes to load shedding stages announced by the power utility.

On Wednesday, Eskom placed the country on stage four from 2pm until 10pm, thereafter stage two, and is currently implementing stage three until 10pm.

Durban student Byron Govender (20) says load shedding is affecting both learning and submission of assessments, as all classes have been moved to digital platforms. He says he is also concerned about interruptions to online examinations.

“Assignments are submitted online, tests are done online, everything is done on a digital platform that requires electricity to access and to maintain access – because as much as there’s schedules for load shedding sometimes it is a bit too long and people can’t charge their devices long enough to stay logged on because the power will just cut off on your phone or on your laptop.

Exams are nearing, exams are happening for some modules and I’m worried about half-way through my exam my power cuts, and I’m worried will my submissions still got through. Am I now eligible to write this exam because my power cut and now I can’t submit properly – there was a break in my signal. Now the lecturer might think we’re cheating,” says Govender.

Earlier on Thursday, Cabinet acknowledged South Africans’ frustration over this and said it is confident in the measures that have been put in place to improve the situation.

More on Ntshavheni’s remarks in the video below: