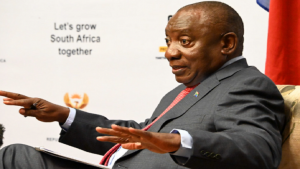 President Cyril Ramaphosa is scheduled to answer various questions in the National Council of Provinces on Thursday afternoon. Questions range from the possible postponement of local government elections planned for October to gender-based violence and an increase in violent conflict on the continent.

An EFF MP wants to know why an independent panel was appointed by the Independent Electoral Commission (IEC) to look at the possible impact of the COVID-19 pandemic after the election date was announced.

President Ramaphosa must also answer whether he will postpone the elections should the panel recommend that.

On Wednesday, the IEC launched its campaign for the polls and says it is ready despite fears of a COVID-19 third wave.

IEC Chief Electoral Officer, Sy Mamabolo, said the appointment of retired Judge Dikgang Moseneke to make a decision on whether the elections should go ahead will provide much-needed relief and clarity.

“While the Moseneke process is under way, we are not going to cease on preparations because we’ve got to be technically ready to deliver on elections. Certainly it doesn’t mean that we are ignorant of the pandemic which is why the process led by Moseneke to systematically analyse the prevailing conditions and balance the constitutional prescripts, the legal prescripts, submissions by politicians, medical evidence so we are eagerly awaiting that work that has commenced,” said Mamabolo.

Some opposition parties have slammed the decision to go ahead with the launch, saying it was a reckless and wasteful expenditure.

IEC unveils the election campaign under the tagline, “Every Voice Together”:

The elections are not the only item the President will have to answer to.

In the light of ever-increasing incidents of gender-based violence, MPs want to know how the fight against the scourge could be further strengthened.

There are also questions about whether an audit was done to determine the extent of vandalised, damaged and stolen infrastructure during the hard lockdown in 2020 and how it will be repaired.

President Cyril Ramaphosa to answer various questions in the NCOP: