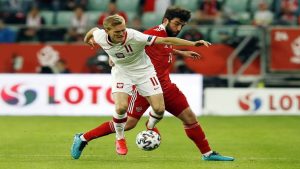 Russia’s Sports Minister says that the country’s men’s national soccer team aims to reach the knockout stage of the European Championship, as they prepare to kick off their campaign on home turf in St Petersburg on Saturday.

Russia takes on Belgium, the world’s top-ranked team, in their opener on June 12, and then Denmark and surprise qualifiers Finland.

Currently ranked 38th, Russia has exited the Euros at the group stage in the last two tournaments.

“The Sports Ministry, the Russian Football Union have set the goal of reaching the next phase of the tournament,” Sports Minister Oleg Matytsin told reporters on the sidelines of a team training session, the RIA news agency reported on Wednesday.

“We have deployed many efforts for this to happen.”

Russia faces long odds to advance, however, as they try to fill the void left by the retirement of goalkeeper Igor Akinfeev and jump-start their tepid attack.

Russia finished last in their group at the 2016 tournament in France, when violent clashes between Russian and English fans in Marseille overshadowed the team’s performance.