Springboks in camp with notable absentees 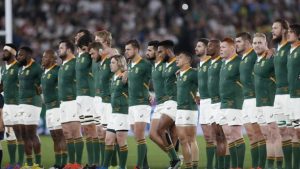 The South African national rugby team is in Bloemfontein preparing for the international season. They have already suffered a setback, eighth man, Duane Vermeulen, had to undergo ankle surgery, while two Ireland-based players, R.G Snyman and Damian de Allende, picked up first-degree burns when they poured petrol on a fire.

The Boks are set to take on the British and Irish Lions in a series that will test the World Champions like no other team. The squad that has assembled in Bloemfontein is small group consisting of locally-based players and those from Japan.

Coach Jacques Nienaber is only expecting a full squad on 27 June. For the next three weeks in the City of Roses, it will be a conditioning camp ahead of the international season.

The players are meeting for the first time since the parade of their World Cup trophy in November 2019 and Nienaber is pleased to be with the players.

“It’s nice to be on the field again, to see the players again, and to coach again. The last time I was on a rugby field was the Wednesday before the world cup final, in the springbok environment where you actually make plans for the training sessions. The franchises were good enough to give us some coaching opportunity with them which was nice, which we are very thankful for because we didn’t have a lot of opportunities but now there is fantastic ground and nice energy for the guys who haven’t seen each other for such a long time.”

There is an unfortunate situation regarding centre Damian de Allende and lock RG Snyman, both with Munster in Ireland. The two suffered superficial burns from a fire pit incident, but they are said to be fine and eager to be cleared for travel. But Nienaber’s biggest concern on the injury front is the injury to his big number eight, Duane Vermeulen.

“The feedback that I got is that hopefully the surgery goes well firstly, and then the rehab goes well. Jessie had a similar injury and obviously, we can’t be discussing such injuries because of all the privileged information and stuff like that. But some players come back from 5 weeks to 16 weeks.”

The 48-year-old Kimberley-born Nienaber is still in the process of assessing his player stocks and has made it clear that he realises how important the British and Irish Lions tour is.

The Springboks will play against Georgia in two tests early next month before taking on the touring Lions.