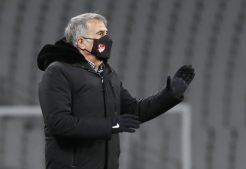 Turkey coach Senol Gunes will be looking to repeat the success of his 2002 World Cup campaign, in which he led the team to an unexpected third-place finish, when they play at Euro 2020.     Led by influential captain Burak Yilmaz, who is having a brilliant season at Lille, Turkey go into the campaign with a mix of youth and experience.     The balance seems to work as they grabbed wins against the Netherlands and Norway in World Cup qualifiers this year.     The 68-year-old Gunes has been back at the helm since 2019, having previously been in charge from 2000 to 2004, and achieved Euro 2020 qualification after a dismal Nations League campaign in which Turkey came bottom of League B with one win.     In the Euro 2020 qualifiers, Turkey finished second behind France but above Iceland, Albania, Andorra and Moldova.     In a news conference last weekend, Gunes did not seem too optimistic about Turkey’s chances at the finals in Group A, where they play Italy in the opening game on June 11 followed by Wales five days later and Switzerland on June 20.     Born and raised in Turkey’s Black Sea coast city of Trabzon, Gunes played for the local team for over a decade and won six championships. Trabzonspor later named their stadium after him.     In Gunes’ first stint, he took Turkey to the greatest achievement in their history, a third-place finish at the 2002 World Cup and won UEFA’s Coach of the Year award.     Turkey exited Euro 2016 at the group stage but will look for inspiration from their third-place finish at Euro 2008.     Only three players from Euro 2016 are still in the squad.     Gunes often deploys a 4-4-2 formation with a defensive midfielder in front of the backline. Hakan Calhanoglu is usually at the top of a midfield diamond as the creative force.     Burak Yilmaz is one of two players to have played for all of Turkey’s big four clubs – Fenerbahce, Besiktas, Galatasaray and Trabzonspor. He is Turkey’s leading active scorer and the second highest in their history, with 28 goals in 66 appearances.     Yilmaz is expected to take the main striking position as he did in World Cup qualifying, with an attacking trident of Kenan Karaman on the left and Yilmaz’s Lille team mate, Yusuf Yazici, or Leicester City’s Cengiz Under on the right.     Another of Turkey’s strengths is the middle of the defence, with Leicester’s Caglar Soyuncu, Liverpool’s Ozan Kabak and Juventus’ Merih Demiral fighting for a starting spot.     The weakest position in Turkey’s team seems to be at left back, with Fenerbahce’s 32-year-old Caner Erkin left out of the squad after being capped 59 times.     Gunes said it was the hardest decision he had to make while picking his 30-man provisional squad but Erkin’s recent performances had been underwhelming.